As mentioned previously, I plan to try out Anonymous Ads with Tumblr blogs. There are two good reasons for using these Bitcoin advertising systems: 1. I want to earn Bitcoin!! (Bitcoin is now valued at $222, you can check the latest pricing at Mt.Gox), 2. These systems mostly don’t have much restriction on ad placement. As long as you don’t break the template code, you can place the ad code anywhere you want, and as many as you want. Besides Anonymous Ads, there are few more platforms that can pay publishers in Bitcoins, you can also try Operation Fabulous, CoinURL, or BitcoinAdvertisers. Now I have a monetization method, I need some good looking themes to go with the blogs.

Recently, ThemeForest has put together a section showcasing all their Tumblr themes. As of today, there are 112 Tumblr themes available for purchase. Here are some of my favourites. 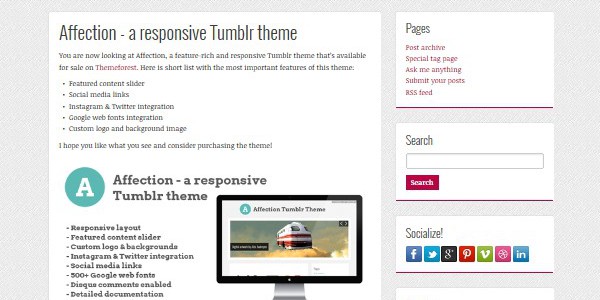 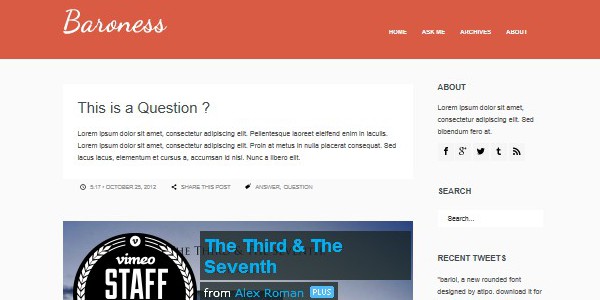 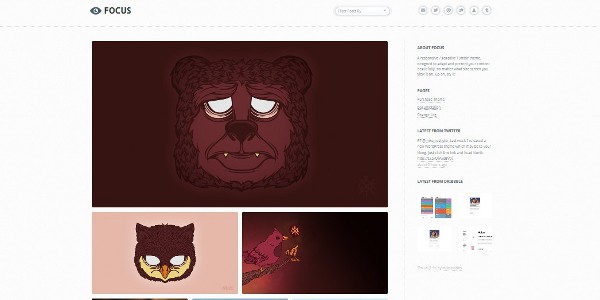 Focus – A Minimalistic Tumblr Theme – $20 – Focus is a minimalistic and adaptive Tumblr theme aimed at presenting your content, to any device, without clutter. Easy to change colours and background images as well as support for Disqus, Flickr, Twitter, Dribbble and Google Analytics. This theme gives a tailored view to each device (Android, iPhone, iPad, Desktop, etc) that visits it and only serves the content that is required, helping to speed up delivery of your site. 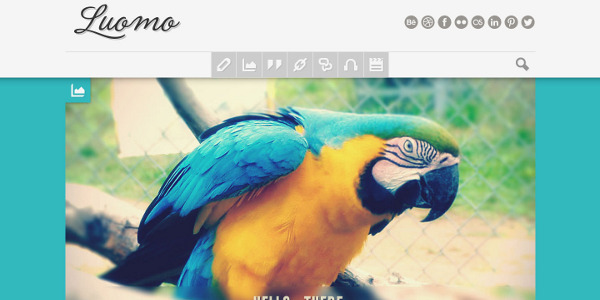 Luomo – A Responsive & Expressive Tumblr Theme – $18 – LUOMO is an expressive, responsive Tumblr theme created by Pixel Moxie. LUOMO is designed to display your media at large sizes in big style, giving you great control over each post color palette. With LUOMO, you can tailor each post to complement the way your content looks and feels. LUOMO adapts to the screen size of the device you’re using to view—your content will look awesome on any device. This one is really colourful, you can choose different background colour for each post! 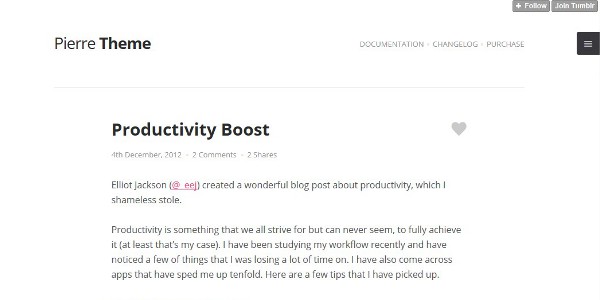 Pierre – A Super Clean Tumblr Theme – $20 – Pierre is a super clean Tumblr theme aimed at making your content the center of attention. Included is scalable typography and support for most social media types. Easy to customise with support for Disqus, Flickr, Twitter, Dribbble, Instagram, Google Adsense and Google Analytics. This theme gives a tailored view to each device (Android, iPhone, iPad, Desktop, etc) that visits it and only serves the content that is required, helping to speed up delivery of your site. If you need a Tumblr theme that supports Adsense, this is the one for you. 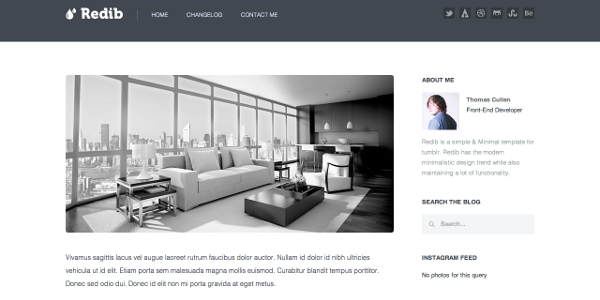 Redib Tumblr Template – $20 – Redib is a simple & clean template for a tumblr blog. It comes with lots of social features built in including post sharing and disqus commenting integration. Redib supports all post types and has a built in twitter feed. Redib allows for you to easily import your own logo onto your blog. 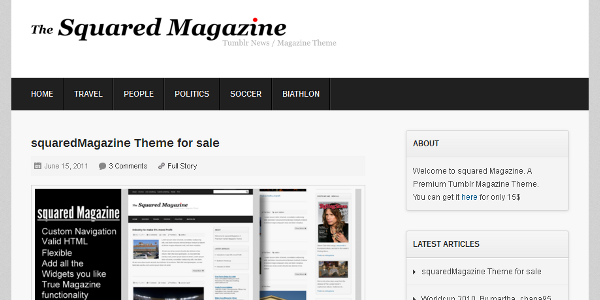 Squared Magazine – Tumblr News / Magazine Theme – $15 – Squared Magazine was designed to give your Tumblog a real Magazine feel and look with all the popular Magazine Functions, like “Latest Articles” Widget and “Related Posts” Widget, while still being perfectly suitable for a blog. Somehow it does look like a WordPress style magazine blog with a default right sidebar and stuff… 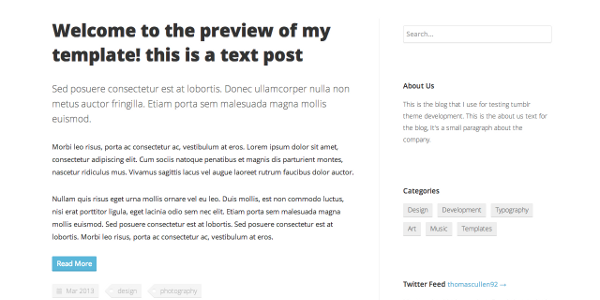 Stevie – Clean & Responsive Tumblr Theme – $18 – Stevie is a clean & responsive template for a tumblr blog. It comes with a beautiful image slider & lots of social features built in including post sharing and disqus commenting integration. 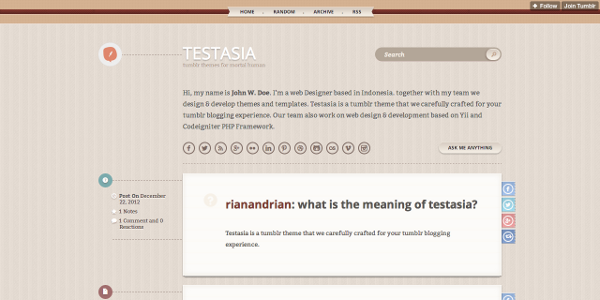 Testasia – $19 – TESTASIA is a Premium Tumblr Theme that we carefully crafted for your tumblr blogging experience. This is a personal theme that’s suitable in use for people who have an active and enjoyable life. 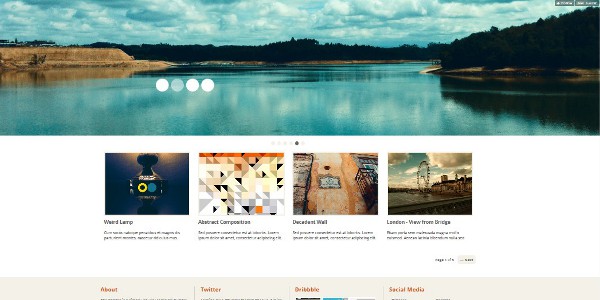 The Catalog Tumblr Theme – $20 – The Catalog is a simple yet very complete Tumblr Theme focused on getting all your photos, text, videos, audio in a catalog-like format. All posts are showed as thumbnails and you can see more by clicking them. It’s a responsive theme that works well in different screen sizes. It has a slider that fetches posted photos based on a special tag. 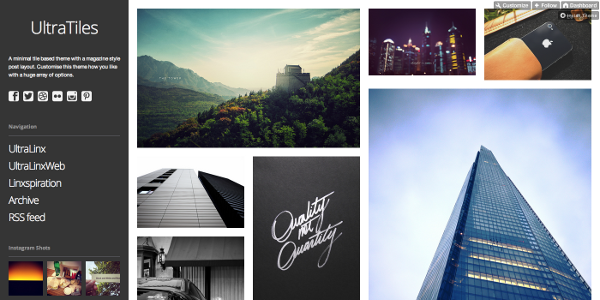 UltraTiles – Customizable Magazine Style Theme – $20 – UltraTiles is a minimal tile based theme with a magazine style post layout. It has a huge array of features so you can customize the theme how you like. Nearly everything about the theme can be changed so you can make it look how you like. This is one of the best masonry style grid based Tumblr theme. I did check it on Explorer, Firefox and Chrome, and it works out perfectly.

View all posts by someguy

One thought on “11 Great Looking Tumblr Themes from ThemeForest”

This site uses Akismet to reduce spam. Learn how your comment data is processed.